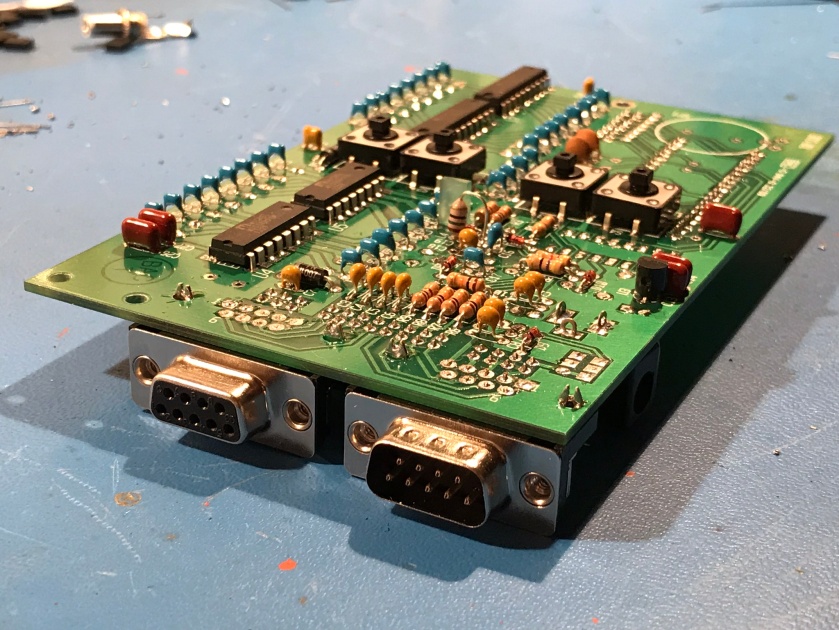 “Is anyone using 40m?” echoes across the patio only to be followed by something similar about 80m as we drift further toward the graveyard shift.

There’s 10 of us contending for different antennas and we seem to be constantly rummaging across the floor looking for a connection to an antenna and some magical distant ham operator.

It’s all a mess only somewhat compensated for by the stellar view of Martinique from this little piece of Caribbean paradise.

Walking into the Prince Edward Island superstation, I’m struck by how dwarfed the two K3s are by everything else. I have some sense of what is what but its an eye opener to see what additional gear is needed to make a multi antenna station hum. Boxes to control which direction an antenna points, boxes to combine multiple antennas to pick up a weak signal from hopefully somewhere exotic.

My policy toward kits is quite simple. If available and if I remotely think I’ll build it then buy it. The rationale is that many kits are boutique in nature, made on limited runs and quite often use components that are going the way of the Dodo, here today and gone tomorrow. With that in mind either buy it now or run the very real risk of being disappointed in the future.

Elecraft has been on a binge of end of life-ing kits including the venerable KX1 and K1 radios. With this in mind and entirely oblivious to Elecraft’s plans, I nabbed a couple of their KRC2 kits. One day I knew I would enjoy building them but better still I knew I would put them to good use.

However, I have to confess that when I acquired the first KRC2 kit I didn’t fully understand what it did. I knew it tapped into the radio to computer communications, listened for frequency/band changes and then making that event available as a unique electrical signal destined to activate/deactivate different parts of a station such as filters, antenna selection etc. Clearly something like this was making Ken’s VY2TT Prince Edward Island station hum.

Building something for the sake of that isn’t particularly satisfying to me. Having a larger goal with a direct practical benefit is far more motivating and when the build/debugging getting frustrating and is tending sideways, the passion is what drives us through the tough times.

Our suitcase Costa Rica contest station was only marginally better organized than our Martinique facing Saint Lucia jungle of wires.

Having looked at commercial station automation gear such as Ken has, was quickly dismissed on bulk and weight. Simply too large, too heavy to take along with the real essentials of a contest station such as a radios and antennas on a regular plane. With a strong goal to do more of this kind of trip on a regular basis, it was clear the KRC2’s time has come!!

Buying commercial gear might have been dismissed but reading their web sites provided valuable insights up to a point of what boxes of functionality the ham community seemed to think made sense. Antenna switches, interlock devices, filters and more filters, diplexers, triplexers, rotators, SO2R boxes and we haven’t even mentioned radios nor computers and their attendant software. So I set to, to try and really understand what I needed to fulfill a goal of not just simplifying our cabling but building an effective contest grade portable station.

Elecraft have had many kits from the ultra small single evening product such as a 2 tone generator all the way through to arguably the best kit radio ever offered in the form of the legendary K2. Sadly some of the intermediate kits such as the K1 or KX1 have been deleted from the product roll.

I see no reason to rush my kit builds because once done its probably never to be repeated and so I want to savor and enjoy every moment of the process. It’s that journey thing. Methodical and patient has the upside that I verify much as I go which in turn minimizes the chance of failure. Like all Elecraft kits you get a thorough build guide, packages of parts typically grouped to match a build stage and of course an excellent (and in my eye’s) beautiful PCB circuit board. I’ve done lots of Manhattan style builds and while very flexible in terms of what you can undertake, a ready made kit of everything you need plus a PCB is simpler and less prone to failure.

I enjoyed the build and am thrilled I have the first part of my 2019 automated station plan in place.

What’s next? I’ve already completed an Arduino based SO2R controller that I’ll share in a separate blog. The second KRC2 kit sits waiting to be assembled and I’ve acquired a couple of antenna switch PCBs and parts to build out.

I acquired a beautifully made 10m/15m/20m TriPlexer from Pavel VA6AM who has supplied filters, diplexers, triplexers etc across the globe including many of the IARU contest stations.