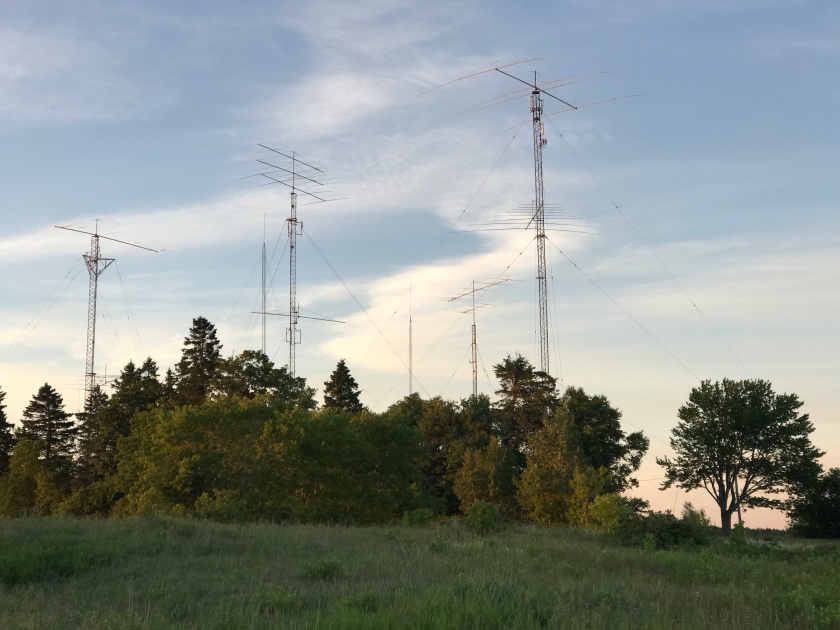 Her smile is quite welcoming and I ask permission for a photo. In that moment of exuberance I put my hand behind her shoulder. She seems oddly cold and rigid. It’s late and maybe like me her day has been long and longer. I’ve arrived on Prince Edward Island in Maritime Canada and I leave her to greet other visitors.

As the last bag is collected, I realize that three flights back to back might have been a stretch. A late arrival in Montreal coupled with a tight connection had me running to catch my flight and I guess my bag hadn’t tried to cut to the front of the line to keep pace with me. I’m not the only one and she persists in thrusting her phone between me and the Air Canada missing baggage representative oblivious to any English and the suggestions she wait a moment till I’m processed.

The dark road and hypnotic lane line pushes me into momentary slumber. I lurch out, only to succumb moments later. I feel bad for Matt as I assume conversation will help break his monotony on this long drive.

The world has been transformed from darkness to bright morning light. Coffee beckons and a casual glance through the kitchen window gives me an initial sense of how different this place is. What I see are towers, lots of them, small, large, tall, guyed and all exceptionally impressive.

I step outside and mutter something like “Wow, this is incredible…..” and I seem to repeat this again and again all the way through to Monday morning. When you live in an urban area and in my case on a postage stamp size lot, this assemblage of antennas is the stuff off dreams.

It takes time and I’m in no hurry, to sift through and identify what is what. A 100 ft tower, maybe taller has a 3 element 40m Yagi. That’s mind boggling to me. Another equally tall tower has 3 stacked 20m Yagis. Not one but yes, three. Unbelievable. Other towers have 15m stacked Yagi and a medley of 10m are scattered around. Four smaller towers are part of a phased vertical setup on 80m and something similar on 160m. In all seriousness I’m not sure what else could improve this.

The radio operating position is impressive. Not one but two Elecraft K3 radios flank a stack of video monitors. Each has a high power amplifier attached delivering, what for me are ridiculously fantastic amounts of power. Stretching out on either side of the cockpit are boxes upon boxes of gear to manage this station. For a guy that has a very very modest portable station that basically consists of not much, it’s fascinating to see what is required in a sophisticated and capable contest station.

Given Yagi antennas are very directional in nature, a rotator’s function is to turn the antenna to point where you want to communicate. East for Europe, southwest for the US etc etc. Pick a point on the compass and turn the knob on a box and magically a Yagi is pointing to where you want.

I step into the realm of something completely new to me, phased verticals. Four of them are controlled by a box next to the cockpit. Phasing is a technique of shifting the relationship between the peak of the signal going to one antenna relative to another. Through this you can concentrate your available signal and thrust it toward a direction. The initiated may say why not use a Yagi instead of the phased verticals as Yagis also concentrate a signal in a given direction. When working with really long wavelengths such as 160 meters or 80 meters the Yagi would be huge but worst still mounted up at 240ft and so the phased verticals are a more practical approach.

Beyond coming to admire the work of Ken (K6LA), PEI DX Lodge station owner we are here to participate in a ham radio contest. Clearly (or not) a station such as Ken’s will out perform virtually anything out there but the location is also very advantageous. Similar distances to Europe, the west coast and the Caribbean mean we have equally good or bad chances to contact many stations.

The “shack” wall is adorned with Ken’s past contest awards. Clearly the station and location have good karma.

Much of modern day contesting is driven by software that people like myself and Mat interact with during the contest. Recording your contacts call sign (i.e N7UN, W3LL etc) for scoring purposes is one function. Allowing me to record and repeatedly use the same contest messages over and over again saves my voice and is yet another function. Ken has chosen WriteLog which is new to me and Mat walks me through the main points. It’s not that any of its that hard to learn but contests are all about maximizing your efficiency and not fumbling around from one contact to the next. Time counts!

All that is left to do is get some hands on experience with the “beast” and being described as the loudest, clearest and strongest voice on the air is music to my ears.

I head to bed a happy camper knowing that tomorrow with the station survey complete, training complete, hands on experience complete it will be time get some rest. Head out, get some sunshine, see the sea and sample the local food and beer ahead of the IARU HF contest.

However, it isn’t all joy as despite repeated assurances from Air Canada my bag hasn’t arrived. Almost 36 hours later I’m still wearing the cloths I travelled in and I really would like something different.

Turns out that Air Canada has some pretty underpowered planes to this destination. Full flight means baggage has to come off to stay within the weight parameters. So my bag waited and missed promised flights as they turned out to be fully than expected. Well it finally arrived and now I could venture out to see the sea better dressed for the occasion.