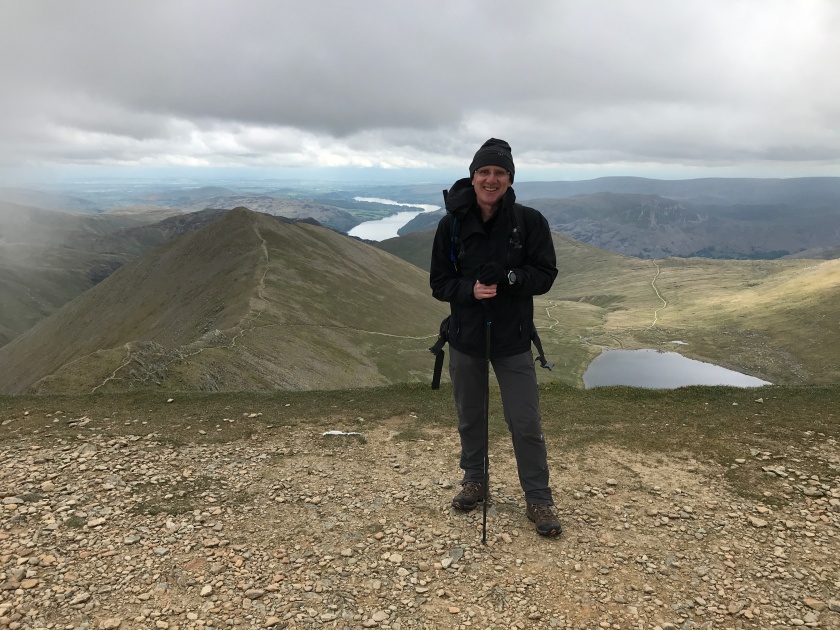 Solo operation: No with Mark M0NOM/P

Mention the Lake District to many Brits and they will most liking beam and go wobbly in the knees. This bucolic area with it’s hills, stone walls, stone building, stone villages, patch work of fields, sheep and of course lakes is arguably one of the prettiest places to visit. It just seems to capture everything that people imagine is beautiful and understandably inspired Beatrix Potter, Coleridge and Wordsworth to create timeless pieces.

Of narrower fame is Alfred Wainwright, a man who loved, rambled amongst and over virtually every inch of the Lake District. What has assured his place, somewhat like Jon Muir in the West, is how he has made it accessible to many of us through his stunning and unique sketches, maps and descriptions of over 300 Lake District peaks. Even if you never visit nor hike the Lake District it’s worth seeking out one of his guidebooks to see how great and unique they are.

A unique opportunity to activate and meet face to face

SOTA can be a very solitary pursuit for activators, wandering off to points unknown laden with gear and the promise of adventure and expectation of fun. You get to hear your chasers over the radio waves but most often never get to meet them face to face. Given the compactness of the UK and especially the Lake District it’s potentially the perfect destination to bring a group of like minded SOTA participants together with the promise of many Summit to Summit contacts, a strong base of local chasers and then the chance to meet, chat, eat and drink. While it’s not hard to suggest nor organize something the most difficult step is the first and actually floating the idea.

Mark, M0NOM took the initiative and here we all are. Possibly 15-20 activators out on different Lake District peaks supported by a much larger community of local and distant chasers. I’m here, Paul (HB9DST) has flown in from Zurich and Jamie (N6JFD) wins the prize for distance in having flown from California for the event. Many have travelled from across the UK including Andy (MM0FMF) from Edinburgh and Phil (G4OBK) from Yorkshire.

This compact nation belies its size as you can travel 50-100 miles and go from one regional accent and vernacular to another. In Edinburgh, you’ll hear “wee” and “lassie”, go a 100 miles south to Newcastle and hear a distinctly different  “Geordie” spoken. So I shouldn’t be surprised that I’m learning new words while hiking with Mark. A beck is a stream, a tarn is a lake and a fell is a pike which are both peaks.

Helvellyn, straight up all the way

Don’t be fooled by the diminutive maximum height of “mountains” in the UK. Having hiked up to 13,500ft plus or minus a few times, its easy to think that three or four thousand feet is a walk in the park. Not so!  In the States we gain elevation through switch backs but it seems many of these trails go almost straight up, can be quite (very steep) and sometimes very loose under foot, all making for potentially a tough and treacherous journey that requires stamina and forbearance equal to navigating a 13,500 footer.

This 37 mile and 10,000 ft of ascent race touches the high points of three “old” counties; Cumberland, Westmoreland and Lancashire and the peak are Helvellyn, Scafell and Coniston Old Man.

Operating and catching our breath

Mark has an interesting 2m system optimized for Wainwrights on the Air (WOTA) which are more abundant in the Lake District and only require 1 contact (unlike SOTA’s 4) to qualify a peak. His approach is to have an antenna mounted high and above his pack and then use a hand held to listen and contact stations as needed essentially removing the time to set up ad tear down a station.

The upside for us, is the ability to hear activators as we approach our destination and grab chaser points.

Once at the peak of Helvellyn we pretty quickly became involved in a chase and then soon thereafter where chased and the activation had started de facto. No setup, just standing, paper log in hand. We nabbed 25 plus stations while operating and standing. The mist lifted, patches of blue sky emerged and we began to get a better view of Ulswater and Red Tarn

Unlike many co-activations we essential tag teamed and once Mark had the contact I would grab the mike and do like wise returning it to him after each. It worked well especially as we hadn’t really discussed how we would operator individually and together prior to arriving. It simply happened and seemed to work fine. 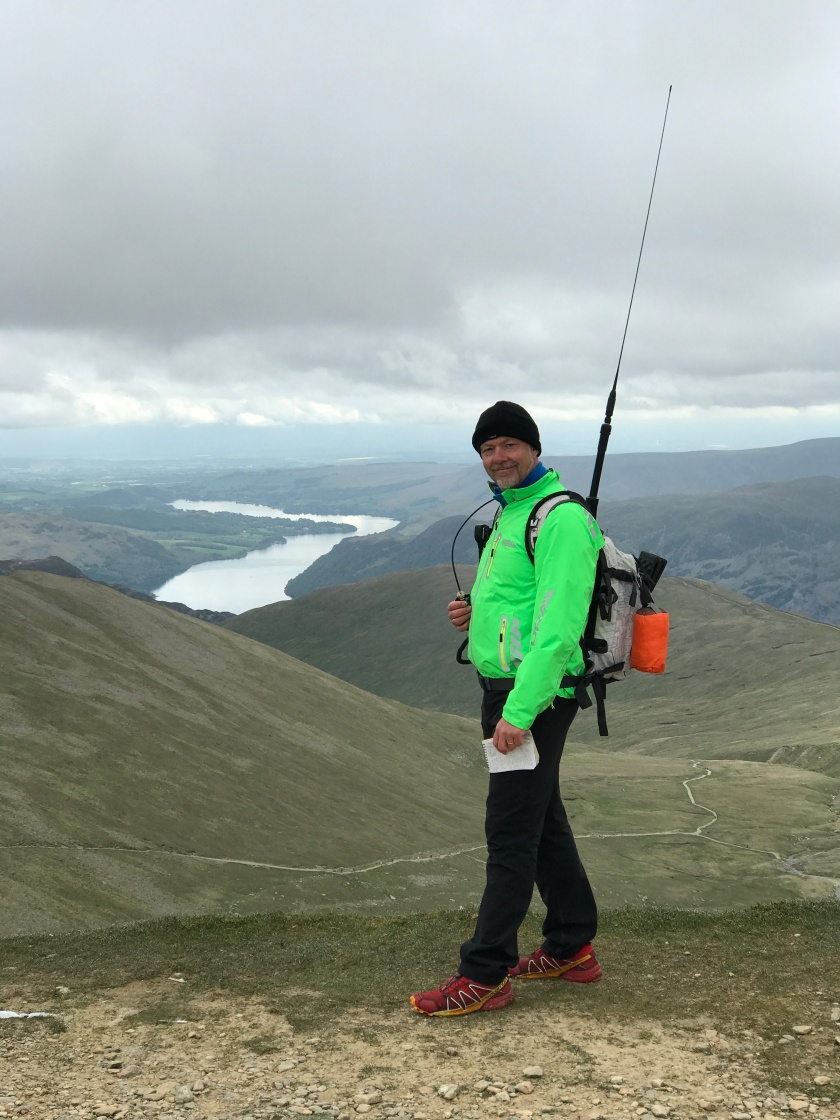 A distance record for me …..microwave to Wales…..

I have been primarily an HF (aka shortwave, long distance) SOTA activator and while I don’t see that changing any time soon, I do like to try new and different things. To that end I have tried about ten FT8 activations but don’t really care for them nor it on a mountain top.

I have dabbled a little with 2m SSB and that might be best pursued during one of the great and numerous RSGB activity days focused excessively on it, rather than a random attempt from a SOTA peak.

New today and being my third attempt is microwave. Not warming a cup of coffee in a portable microwave oven but more trying to see how far I can go using a microwave radio technology. It’s a bit of a crap shoot as I’m not sure any from the comparatively small population of microwave radio guys are out and about or listening. I think a total of five activators declared interest in trying microwave during the course of the day but there in lies the challenge in that the day is long and I may well be a radio noise in the ether head by none at this precise moment and for the limited period I will devote to it.

Fortune favors me as my random call on 1296.200 Mhz SSB has a faint but distinct voice responding. Adrian (GW4AZS) in mid Wales isn’t just responding back but is also atop a SOTA peak making for the gold standard of Summit to Summit. UK geography being a bit rusty after almost 40 years in the US, I know mid Wales is more than a few miles away and I’m pretty chuffed at my serendipitous accomplishment. Later I learn he is 218 km away and Andy M0FMF shares that is a pretty good and an award qualifying contact.

Co-activing, it’s fun and you potentially learn a lot

I’ve been out and about with a fair few SOTA activators many far more accomplished than me.

Many a trip and memory has been created with Guy (N7UN).

Fred (KT5X) and John (K1JD) hosted within New Mexico. Ron (W6PZA) and I have wandered Northern Cal together while Michael (KX6A) and Scott (AK6Q) have wandered southern California with me. Last but not least Paul (HB9DST) has suffered me atop peaks in the US, Switzerland and the day before in the G/LD.

Safety in theory is enhanced, chit chatting isn’t as one sided as with a sheep and of course we all do things differently especially given the solitary nature of an activators activations.

I was thrilled to watch Mark deploy his SOTABeams dipole in what I thought was a novel and almost guy-less way and then to boot get on 80m and nab locals up and down the UK. I’m inspired and have already received my first SOTABeams dipole antenna.

Mark’s backpack deployed 2m antenna is another intriguing approach and one I had never considered but like the dipole will weave into future operations.

Summit to Summits (S2S) are the Gold Standard

Part of the attraction of a group day is the enhanced possibility for S2S and it’s made easy with close proximity and therefore easy 2m FM operation. I managed to nab 8 S2S from Helvellyn and was thrilled.

The challenge with SOTA in a cooler or cold environment is that once you stop you begin to stop generating heat and start losing it very quickly. I find I hit a cliff after some period and just want off the mountain top immediately. Beginning to feel the effects of the wind and cooler temperatures plus the welcome but large number of other people we decide to head down and up the Seat Sandal to what we think is a virgin and un-activated event peak.

How wrong we were but that is covered in the next blog.

Was it worth it?

Thanks Mark for letting me tag along and talk your ear off.