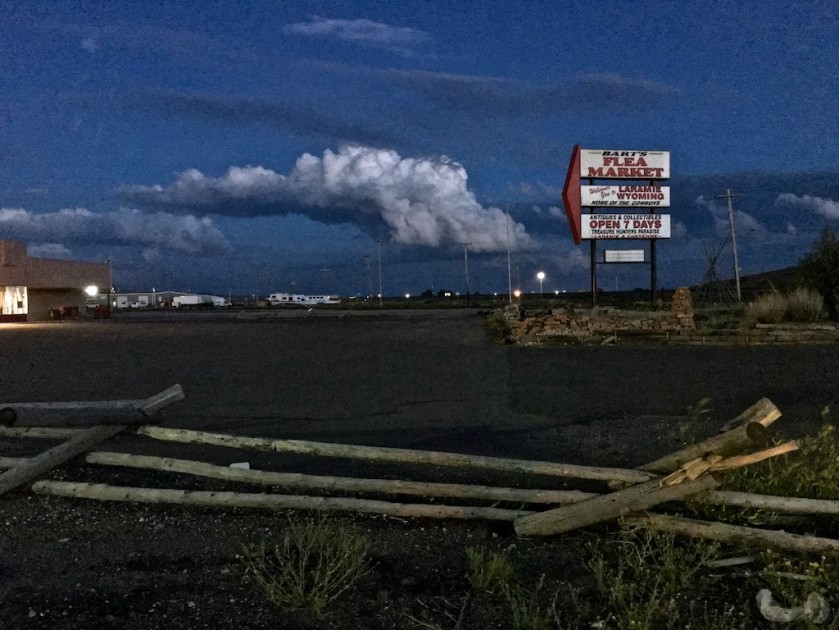 Solo operation: No, with Guy N7UN

The card key light shown green but the door wouldn’t open. The smell of cold pizza, burghers and stale french fries was unmistakable. The TV flickered dimly  across the room and the guy on the bed looked back at me as I walked in. Arrested in my surprise I apologize profusely and backed out. This is gun country and I wouldn’t have been surprised to see him reach for something after my lock escapade. Maybe the game and pizza mellowed him but I was irritated with the hotel. Thinking back she had her doubts if the room was free and clearly it wasn’t. From being first in line until this was resolved was almost an hour. We wanted dinner and somewhere not to far away in downtown Laramie was a beer and a hot meal.

Three activations in one day was a pretty good haul and in some respects Leg Benchmark was the best. Maybe its the end of day light, maybe the sense of accomplishment or maybe it simply was the best of the three.

Driving toward the trail head we passed through a setup for a weekend bike event. We both chuckled at the words stenciled on the side of a trailer “We still hang bike thieves in Wyoming”.

The vast majority of the journey is on an easy to follow trail. Inevitably we reach the point of departure and its always an imprecise process looking for a cross country route with the least amount of fallen timbers and a manageable incline. Its hard to see far into the forrest and impossible to see where our peak exactly is. Imprecision gives way to unexpected clarity, we depart the trail heading up, over, around, back and pass not one but three peak markers until we are convinced we are on Leg Benchmark.

The views are great but maybe that’s a reflection of being liberated from the forrest and fallen timbers. I like Wyoming for many reasons not least its subtly different western terrain and vegetation.

I’ve dragged the Lenovo notebook, attendant KX3 and oversized battery with me as I’m going to try FT8 again. Fifteen minutes and 7 FT8 contacts has me pretty pleased. PSKReporter shows by modest 8 watts is heard in many places including the Canary Islands in the Eastern Atlantic near Africa. Very cool.

Last of the 7 contacts is Scott K3BYU who lives near Portland, OR and is a friend of Guy, my co-activator. Snaps are texted in real time which adds to the fun of our contact. FT8 is like many of the modes designed and pioneered by Joe Taylor accessible via a PC program called WSJT. They is a definite “auto pilot” aspect to FT8 which is both good but for something like SOTA where you want to exchange additional information (such as the summit code), WSJT falls apart somewhat and tends to possibly “confuse” the potential participatory station.