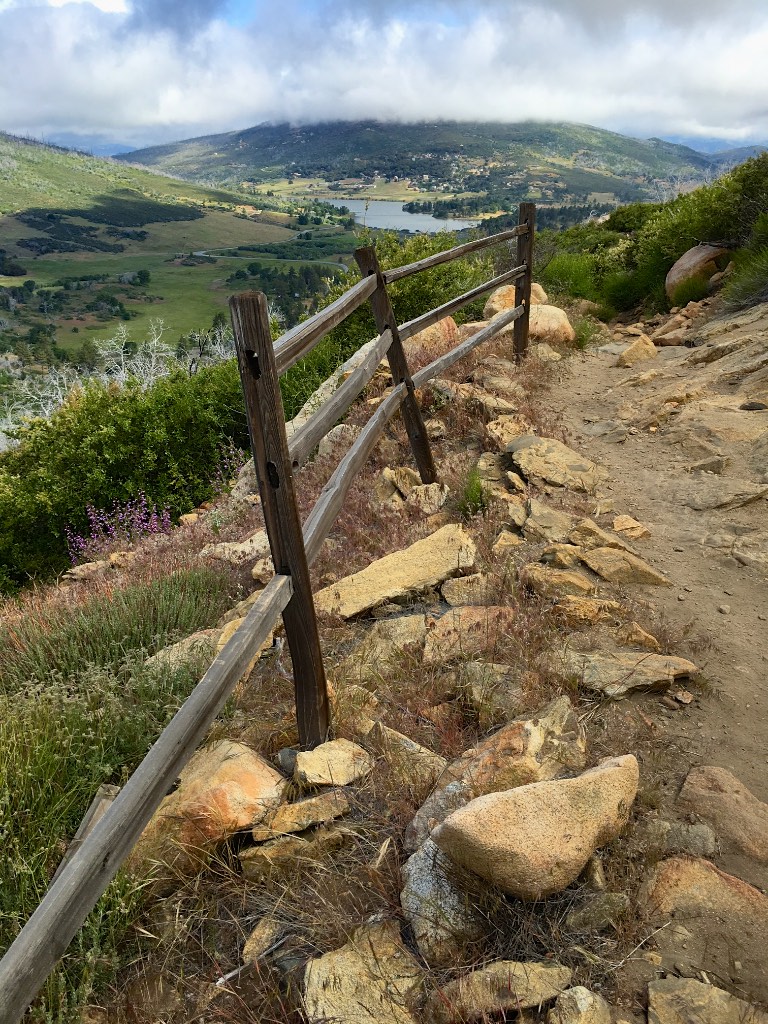 Recommend: Yes. Great views, not too strenuous and easy to follow pretty trail

The rain drop is unmistakable and equally unexpected.  Soon the windscreen wipers are working overtime as I head east in San Diego through a downpour that presumably is another gift of El Nino. I’m trying to read the sky and momentarily find hope from the brighter patch of clouds only to see them turn a deep grey. I’m eighty miles into the journey and keep driving thinking about my rain gear, sitting it out at the trail head or simply stopping at a breakfast diner. Maybe if I had checked the weather reports more closely I’d still be in bed at this point.

Julian lays claim to have produced the highest grade gold in California in its hay day. Now its more of a destination for day trippers from San Diego who probably will correctly tell you that apples are its current claim to fame. Cuyamaca lies just south of Julian and has four six point peaks; two with original names of Middle and North, one with the area’s namesake, Cuyamaca and the last and my destination, Stonewall. The name alone sounds intimidating but fortunately as I arrive in the parking lot the rain is now somewhat south of me. Nobody is here on this wet Wednesday morning as presumably others did read the weather reports.  I’m sixteen cents short of the eight dollar parking fee and a chance encounter with a ranger confirms the state of California is OK with my reduced payment. The note and coin filled envelope won’t fit in the slot and I catch my ranger before she disappears on some early morning task and she takes charge of my overstuffed payment envelope.

Its a pretty trail and zigzags up the side of the peak and in parts bounded by an old wooden and weathered guard rail that looks decades old. Fallen and denuded trees occationally flank me and stand in contrast to the wild flowers that beckon to be inspected.

The last part of the hike is up a set of stone steps and into the bottom of a cloud with uniformly muted views of nothingness.

Setting up is somewhat rote but my external battery caused me to do a double take. That moment of disbelief that what your eyes see can’t and isn’t true is replaced with a moment of panic….the activation is done before its even started. Panic is replaced by anticipation as I remember I have eight far too heavy AA batteries inside the radio that will  enable a whopping five watts output.

The propagation gods know of my battery plight and the ionosphere guides my voice up and down the west coast and across the nation to Florida and points in between. Everyone almost sounds in the next room but I’m on the clock and fifteen minutes after the first contact I’m tearing down the station and then tearing down the mountain.