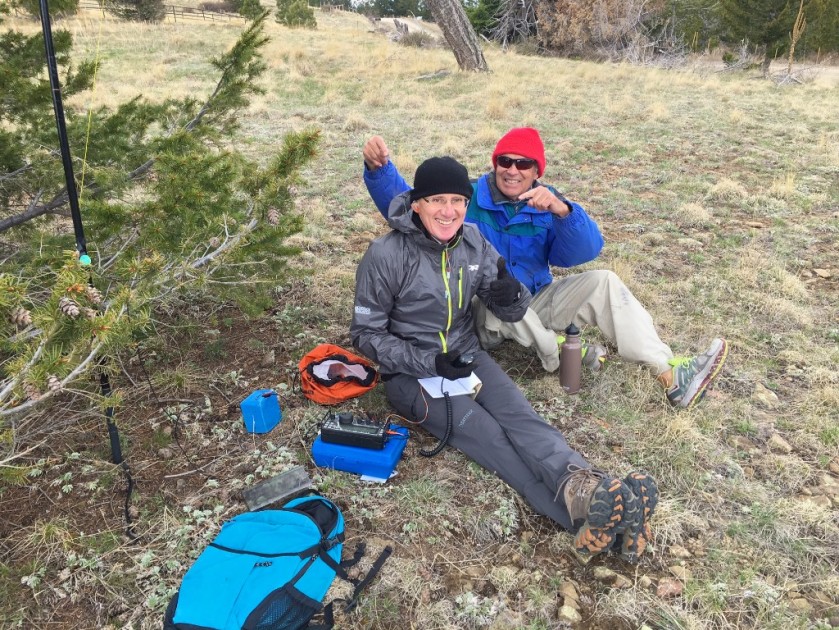 The blue Xterra pulled up at the curb, opening the door I said “hi” to the stranger and hopped in. I’ve travelled almost a thousand miles to Santa Fe, New Mexico to be the guest of Fred Maas (K5TX aka WS0TA) and John de Primo (K1JD). So the driver isn’t entirely a stranger but rather Fred. This is the wonder of the SOTA community that complete strangers can readily agree to head out to remote mountain tops and think nothing odd about it! In fairness, a few emails were exchanged ahead of time and a chance meeting with Doc (K7SO) at Pacificon 2015  is what started the conversation about coming to New Mexico.

The weather has been fickle and our original plans to head north west have changed to peaks near Albuquerque and the blue turquoise skies replaced with clouds worthy of an Ansel Adams photograph. We head south towards Albuquerque and even further south towards the Sandia Mountains and it seems the entire journey we pass mountain ranges near and far. The greater Santa Fe area seems perfect SOTA country in part because Santa Fe has a leg up as its 7,000 ft and so accessibility to 8 and 10 pointers is far easier than many other places.

The Xterra navigates dirt roads up toward Capilla Peak and we arrive in a wooded and rather windy and chilly place. The terrestrial weather matches the solar weather in that neither are very favorable and on the solar front we are dealing with A and K indices way off the scale. CW rules and this SSB guy is a little concerned if his signal will make it anywhere.

John has been a champion and leant me his entire KX3 station relieving me of having to run the gauntlet of TSA airport checkpoints with the ever present possibility that my batteries or fishing pole are persona no gratis within the cabin. John sets up the station and I get to witness first hand the deployment of his and Fred’s home brew End Fed which beyond small allows the operator (me) to sit at the base of the mast. More on all of this in a different post.

So the propagation gods are kind to me and and I bag 19 QSOs in short order. Not bad for the aftermath of a galactic storm of biblical proportions. Many of the SOTA regulars such as W0MNA (Gary), W0ERI (Martha), NS7P (Phil), NG6R Gerry), NE4TN (Walter), KB6CIO (Bob) make the log book plus a summit  to summit on both peaks with WC6J (Jordan) and last but not least K5RK (Larry, king of NPOTA) is a surprise log entry.

Chuffed with our Capilla conquest we are bobbing across mountain dirt roads again and heading to Osha, peak number two. The name makes me chuckle as its the name of my favorite Thai restaurant in San Francisco and I keep thinking of spicy food when I hear the mountain mentioned. The hike up was probably 6 or so miles round trip and the winds are ripping by up to 30-40 miles an hour and fortunately for us the magic of nature has them pass at tree top ensuring I’m whisked off to Kansas unexpectedly. We hike up and see our peak in the distance but have to traverse a saddle down and back up. I have John’s radio station deployed and the wind turns the end fed into a musical instrument that whistles while I operate. Band conditions have deteriorated and I struggle to nab 8 QSOs in the same period as the 18 on Osha. 40m is a bust and 20m has been my money band today.

Day one has been a success and we head back to Santa Fe and dinner with Fred and John’s wives at a local New Mexican restaurant.

I head back to my hotel feeling happy and fortunate to have been treated to this day by Fred and John. Tomorrow looms in my mind as we have more excitement planned.