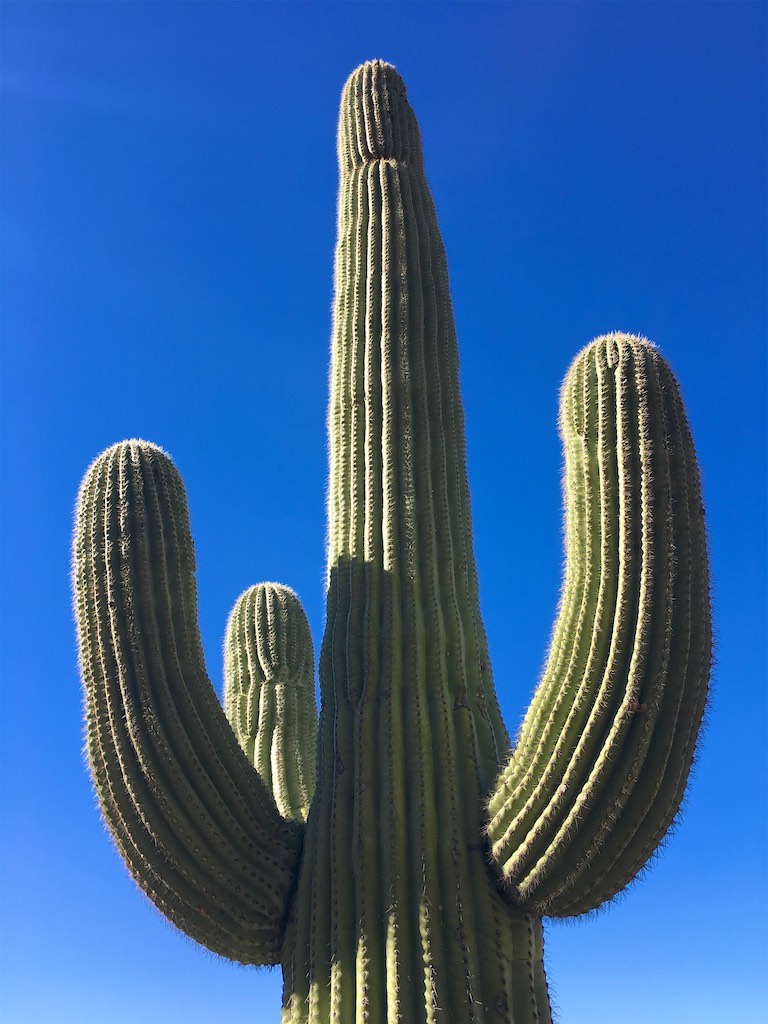 My wife always offers up commiseration when commenting that we got all the second rate US TV shows when I was growing up in the UK. Everyone in the US watched Bonanza and never The High Chaparral. Well it appears we did and we, well I, loved it. So somewhere in all of that black and white viewing a seed was set to see and enjoy the west and western lifestyle including an iconic organ pipe cactus.

It’s day one in Tucson and Guy and I have just finished having lunch with Ken and Kay We head out on the trail which winds around what appears to be a sheer cliff face whose peak we apparently are heading to. This is organ pipe heaven and everywhere I look I see the occasional single pipe and then small, large and humongous iconic four pipers.

Ken’s given us precise instructions about leaving the trail and bushwhacking. Well as precise as they are we aren’t exactly sure but depart at a point that we declare to be the right point. In hindsight we had a fifty percent chance of taking the right direction which actually was the left versus right. The left was steep and normally all fours should be deployed to aid in the ascent. However much to our surprise those cute looking cholla cactus are in fact extremely aggressive plants that want to skewer you and generally use you as a mule to a better growing ground. Somewhat like harpoons and penetrating well into the harder part of a boot, we quickly realize that evolution’s up right position is much less painful albeit not particularly stable when heading up the left versus right trail.

Choice of clothing was essential and Guy has opted for shorts offering the cholla choice pieces of leg flesh to latch onto while my long pants do a credible job of defending me. After a lot of swearing and de-harpooning we arrive and activate our peak. As I state with regular monotony peak views are generally awesome and this with views into Tucson is no exception.

We are heading to dinner at Ken’s home. It sits atop a hill with great views but possibly more importantly great antenna take off angles. From miles around you can’t fall to see his work of art. However, upon closer inspection we begin to see tell tale signs of a flag. It flutters in the wind and we see traces of red, white and blue that make up Old Glory. We lose sight as we navigate the curves of his driveway only to be confronted by the Union Jack, presumably flying in my honor as Kenny is a died in the wool American.

Ken and Kay have the largest wall map I’ve ever seen. It is literally a wall map covering an entire wall. Commenting on it Ken begins to recount a story of his youth that has us all spell bound.

He owned a small single engined prop plane that didn’t go particularly far nor particularly fast. Not content to fly the blue skies of California, Ken decided to fly it from California to Israel. Unlike our experience of intercontinental travel that last hours, Ken’s would last months. Every part of the story was adventure down to the seemingly small but profoundly significant dead reckoning navigation method. No GPS, no navigation beacons but simply a compass, a map and a bearing. Want to get to Iceland. Fly two and half hours over the ocean on a bearing of 85 degrees and look for a significant feature on land such as a river. If the river is south then you have drifted north and if its north you have drifted south. No river, no land, just ocean; don’t panic, adopt plan B.

From the US to Canada, Canada to Greenland, to Iceland to the UK, to Europe and eventually Israel, the journey proceeded to success.

Remarkable, breathtaking and it pays to ask about maps.

So Ken is clearly better than Bren’s Better.

Hats off to you Ken!!